I have been a solo parent for the longest time I know. Not by virtue of  widowhood, although it was one of my fondest dreams (murder is not yet part of my many talents), but rather thru marital dissolllusion.  In fact I’ve been so used to living dual roles of mom and dad for as far as I can remember, I’ve begun to believe that when I came out to this world I already have children of my own. Imagine that, a productive hermaphrodite, well, I maybe up yet for the books. 🙂

Hermaphrodite, my dear children, are people or anim 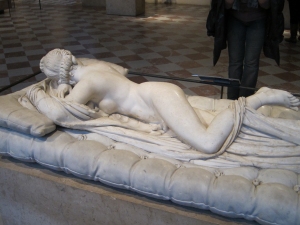 als who are born with both male and female genitalia. In reference to medical records, human hermaphrodites are usually infertile since the genitalia and reproductive system exists ambiguously. No they cannot have sex with themselves. awww… shucks, lost opportunity  🙂 According to Plato, the original perfect human form was hermaphrodites, his parents being Hermes and Aphrodite. When Zeus thought that humans have already grown too numerous, he to decided to split the male and female hermaphrodite parts and scattered them around the world. So, as the story goes, we spent most of our pathetic human lifetime trying to find our sexually separated selves to rejoin once more to achieve the former lost perfection.

How could the Greeks invent such a huge envious jerk like Zeus and make him God,  I could not begin to fathom. And whats with this logic of finding humans already a plenty, then split them into two.. that would only multiply twice the already existing humans at the time that he noticed they were already numerous, maybe Zeus is not really that good in math. No wonder we’re a mess, imagine if we had a God who couldn’t count and parents who consented to have their children split into two, who wouldn’t have issues?!

Reason why the hermaphrodite came into the subject was because I noticed this familiar ramifications about relationships during one of my out-of-body observations as I was having an enlightened conversation with a friend. I often have this first person interactions with my friends where I would be talking to them but somehow found myself logically observing his character as if I was another person floating above observing us both while we were talking to each other, something like déjà vu.  I realized that some of my friends separated and otherwise, come and go into relationships as easy as pie. I’ve always wondered why and how. I have married friends who have flings, or maybe relationships outside of their marriages and make complete fools of themselves because of these complications. They come out of these situations with invisible but distinct badges across their chests reading “nevermind… doesn’t matter.. still had sex. :)” Fun huh.. envious me.

Then I also have single friends, either just like me, with children or without but still single who comes to extreme. Those who go banging anyone whom they have just met  given a tiniest nod of interest so its anchors away,  or those who have become bitter from the experience of a lost love thinking every opposite sex is either a loser or a professional poker faced misogynist/ misandrist whose out to hang you dry emotionally mentally and materially.

What’s with all this relationship thingy? Even Facebook needs to have this declared. Maybe we need to blame Zeus on the curse of having to separate the male and female parts of us that we need to continuously try to satisfy ourselves in conjoining once more to achieve perfection. Why are we dictated so much by society and ask so much of ourselves to satisfy the need of having a partner, be it in bed and/ or in heart? If you walk around young, beautiful and single, most people wonder why you still haven’t hooked up with anyone else, and if you’re not that so beautiful, people would already know why 🙂

Dreams, apparently having someone beside you in bed and have someone to share other significant form of human rituals such as eating lunch, dinner and date nights, is one of those unspoken but so very common denominator dreams. Blame Walt Disney for imbedding us with fairy tales of love and happily ever afters. We all want that, deep inside. We all want a prince charming and a very beautiful Cinderella to sweep us off our feet and live in a life of perfection. But not all of us are that lucky, most of us end up with the mismatched body parts that Zeus separated from hermaphrodite, and I suppose some try to make do, but some still try to pursue, to find his/her perfect fit and if we can’t, we condemn ourselves with the miseries of forever alone taglines.

Me, I refuse to accept this. Maybe you could say I am a believer also of happily ever afters, maybe you could say I’ve placed high standards on myself. But you see, I suppose the reason why I got separated in the first place is because I’ve related sex with having a relationship and somehow along the way  the relationship part is not working anymore. I can’t have one without the other and as I grow older, the more I realize that my body function conforms to the intricate conditions of my psychological, emotional and spiritual set-up. Call me old-fashioned, but like any other girl, I want this man to fight for a cause and win my hand in the tournament of life. Not just finding the other body part and pursue to conjoin it. I refuse to be reduced to just rolling in the hay for the sake of having relationships. I guess I’ve been in one too many times already to make me realize that its gotta to be all or nothing at all.

If I am condemned to forever alone taglines then so be it. I’d rather be happy forever alone than to be with someone and find myself just swimming along in conformity, finding myself miserable if not compromised at the end of life’s journey.

← Getting a life
Miseries and Cats →
Join 138 other followers