After all of the heavy drama from Good Friday, when Jesus breathed his last and the curtain of the Temple was torn into two, his mother and the apostle John was at the foot of the cross, became brave witnesses to his sufferings and death. No one was going to take them away from the sight of the Saviour, not even the threats of the Roman soldiers or the mockery and condemnation of the people around them. This was one of the scenes in this yearly tradition that makes a connection with me. In the end, only a very few will ever stand by your side and never leave, even at the point of humiliation and death. Can we claim for the same true love of brotherhood and loyalty amongst our friends and loved ones today? The pain filled suffering of Mother Mary depicted in Pieta and scenes at the foot of the cross has always moved me. No mother should be made to suffer by witnessing the death of her son, specially at this kind of suffering, but when I was eight, I thought the sufferings my mother bore for me was the way I always seemed to be an insufferable klutz.

I was the best with the eye and hand coordination, back in the days when they didn’t have a scientific name for coolness. I jump high, run fast, spin tops, play marbles and catch frogs in a blink of an eye, but when it came to household chores, I was a disaster. Every 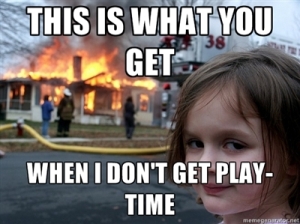 time I wash dishes, there would always be a plate or glass that would be broken, cooked rice would be burnt and pressed clothes had burn marks of the flat-iron triangular tip. Whenever I ran on errands to buy something from the nearest store, either I forgot the change or I forgot the item. I lost what I bought along the way or I never got to the store because I was so proud to admit that I couldn’t pronounce what mom wanted me to buy.  I don’t know if it was just a subconscious affront from me. I never liked doing chores when my brothers were playing outside. I hated the concept of me have to clean up table just because I was the girl, the reason why the plates got broken and I usually ended up with a bruised bottom from belt whips trying to tame me. 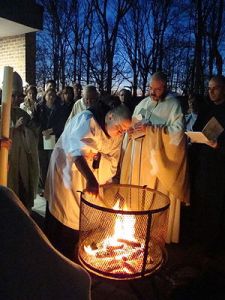 Then there was the Easter vigil, celebrated on the evening of the Black Saturday. From the silent solemnity of Friday, somehow this Saturday lifted the heaviness of the day before. We could now do our usual hide and seek games but still inside the house. We need not be so still and silent anymore and I can see that mom was preparing something better to cook for dinner now, there was a sense of anticipation. This was surreal for me, the Easter Vigil mass. It would start with all lights out as the priest and lectors were reading the gospels from the book of Genesis and a selected reading from the New testament about the Resurrection of Christ. It was a story in Bible verses, culminating at the point of Resurrection when Christ has now conquered death and is now risen in glory. There would be blessing of the Light in form of Paschal candle and Water (the Holy water used for Catholic rituals), the ceremony starting from the bonfire outside of the churchyard.

The bonfire would make me imagine of spirits flying away, now that our Saviour has awaken, just like in those story book Lord of the Rings settings. Again I was making up stories and pictures in my head, not minding much what the priest were chanting or my brothers were doing, when everyone was entering the church, we would shove each other up challenging who could jump highest over the fire before mom can catch us doing it. We better do it fast because she would be looking for us when everyone was filing inside the church, and like Cowboys and Indians, we’d jump over the bonfire before getting inside, I was lucky my dress never got singed. 🙂

After the Liturgy, the light would now be switched on followed by the “hallelujah Christ is Risen” chant, and everyone seem to be so happy. We would repeat our promises at Baptism by holding our lighted candles and after the renewal, the regular rites for mass is now performed, as the mass has ended, Easter vigil has now concluded. We only need to anticipate tomorrows events we call “Salubong”.

Easter Sunday mass is different from the Easter Vigil celebration because the blessing of the Fire and Water is only performed once.The GATT (General Agreements on Tarrif and Trade) during my childhood was not that really in place, probably the reason why the concept of Easter Egg Hunting from western influences was not so popular back then.

What was popular though, was the tradition of dawn procession, where the Mater Dolorosa (mother Mary’s grieving image) was to meet the Risen Christ. Both were on top of processional carts driven to a point in the church yard where a small girl playing the angel was hanging suspended on ropes. All the women were grouped with the mother Mary image and the men were with the Risen Christ image. By the time the two images meet, the girl angel was lowered down to lift the mourning veil that covered the mother Mary image, once lifted, the church bells would ring announcing the event, the choir would burst out singing the Alleluia once again (Regina caeli, laetare, alleluia Queen of Heaven, rejoice, alleluia) and doves would fly out from the pusu puso raining confetti on the images of mother Mary and the Risen Christ including some of the parishioners.

Sometimes we join the Easter vigil, sometimes the Salubong, but very seldom both. I’ve wondered how mom endured so much church going on seasons like this, but I try to go with her whenever I can, I’ve always love the sights, sounds, gawk and wonder at how  people get to be the way they are. Now I know how my propensity for people watching began when I was a kid.

I watched the cute girl angel lift the veil from the mother Mary statue, and must have said out loud that someday I wanted to be one of the angels who would take the veil away, but when my brothers heard what I wished for, they said I was better off becoming a sacristan because I looked like one,

“But there are no girl sacristans!” I exclaimed, they just both grinned trying to drive the point. Fine! I don’t look like an angel, who would want to be a creepy looking angel anyway, I thought to myself as my eyes glanced slightly on the treats my brother was holding. I jumped at one of them, grabbed the newly bought barquillos and kababayan (local name for muffin) he was holding and ran all the way home, all the while already devouring his share of the morning treat.

I knew there would be an arm wrestling and shouting matches, and that I would really have it when he finally caught up to me, but I don’t care. It was Easter Sunday already, and as everything goes, even sinful ways were back to normal again. 🙂